Oh, what a lovely couple of weeks I’ve had preparing my cultural probes. Coffee, music, doodling and drawing, choosing images and materials- I have really enjoyed going into creative mode, and found that it has given a real boost of energy to me and to the project. Not that it was grinding to a halt, not at all, but still shifting into a different work mode has been a reminder of the potential in utilizing my full skillset (when applicable, naturellement), and trusting that science is or can be creative too. Which is why I feel it is worth a mention on the blog. 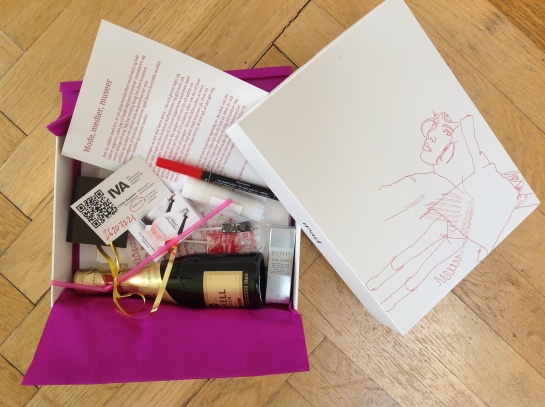 I’m happy with the result too – the content of the activities, the visual identity, the packaging and right down to the goodie-bag goodies I managed to scrounge in order to hit the right notes of fashionisms and playfulness in the overall presentation. It’s nice that it feels a little bit like giving a gift, even if it’s also an assignment of sorts.

I hope, of course, that the effort I’ve put into making the the probes appealing will inspire my informants to also give it their best shot and go along with the game. But working aesthetically and creatively with the probes and stretching those design muscles has also served as a good warm up excercise for the design work I will eventually embark on on the back of the probes and the late summer workshop. I feel up for the task and look forward to that part of the process too.

Sampling
As for the sampling, it has gone pretty smoothly. In addition to the four fashion bloggers I met at the flea, I have found my informants through my extended network (via mail, FB and (RTs on) Twitter. And on top of the ones that I have now made appointments with, I have also had some interest and helpful offers from a few others, so it has been really positive to experience the response to my project.

My sampling criteria have been fairly open, meaning that pretty much anyone who recognized themselves in the call for participation (blogpost in Danish), i.e. considered themselves to take an interest in fashion and used social media, I considered eligible too. As I expected, the respondents turned out to be women in their 20’s and 30’s (ethnic Danes, middleclass, educated etc. – typical museum-goers (to be)). I have not had an explicit gender bias, but have also not actively sought to reach a balanced representation of the sexes – this aspect is not really relevant to my project as I am not focusing on reaching out to new user groups or similar (a question I am often asked, however, but as I see it there is already plenty of aspects included in the project, and this is one I choose to leave out).

Overall, I have not aimed for a certain demographic representation, if anything I consider a certain homogeneity to be preferable, as my sample is so small (8, maybe 9 participants), which could easily lead to cells of one if I was to analyse the feedback directly. Which I won’t be doing, as described in the previous post – I don’t see my group of participants as a ‘sample’, and do not aim to generalize anything form their input.

5 participants blog about their lives and/or fashion; some work, have worked or aim for at career in fashion (design, journalism, styling), others work in media (analyses, consultancy). And if the ones I have already interviewed are anything to go by, they are a really inspiring and lovable lot!