A ramble of inspirations and illustrated notes, some of them pretty old (but need to get them out of my system and pinned down in blog form)

Museums are the new rock’n’roll

Next spring, the Alexander McQueen retrospective Savage Beauty will be on show at the V&A. Organised by the Costume Institute in New York, the exhibition was a massive blockbuster hit when showing at the Met in 2011, with queues growing out into the street. When tickets for the V&A edition went on sale in April, the servers broke down after five minutes due to massive demand (I know, because I was trying to book tickets myself, thinking this a perfect treat for when I’ve finished my thesis). Being pretty slick on the branding/enterprise front, the V&A had of course fuelled the hype (there are still plenty of tickets, although certain days are selling out almost a year in advance), still it’s interesting how exhibitions – fashion exhibitions not least – have become must-go-to gigs.

[Note added 6/7/2015: show so popular that the V&A will be open through the night for the final two weekends of its run (!): http://www.itv.com/news/london/2015-07-03/victoria-and-albert-museum-to-open-all-night-for-alexander-mcqueen-exhibition/ ]

All department stores will become museums, and all museums will become department stores
quote Warhol, whose remarks are often remarkably right on the money. I’ve already blogged about the close connection between Saks and Museum at FIT Shoe Obsession exhibition, and as the theme also emerged quite strongly in the workshops I held with the Designmuseum, I will be examining this relation more closely in my thesis. At Stockholm Arlanda airport, Anton Berg chocolates presented itself with this complete museum display – glass case, object labels, museum lingo – to advertise its brand. This side featured a chronology of the company’s history and and product design, the reverse explained the process of cocoa production. Content wise, telling a story of tradition and expertise served to denote quality, but the meta level message of the museum display as medium elevated the chocolate bar to cultural icon.

At Nordiska Museet in Stockholm the permanent display Power of Fashion (Modemakt) shows fashion and dress from three different centuries. Concentrating on three decades – the 1780’s, the 1860’s and the 1960’s – rather than showing a full chronology means that a greater diversity from each period is represented, which works well as a curatorial strategy. It therefore seemed odd that the touch models provided for the visually impaired did not reflect this selection, but instead allowed you to sense e.g. the silhouettes of a 20’s flapper dress or the Dior inspired styles of the late 40’s /early 50’s. Showing consideration for this group of visitors without truly granting them access to the curatorial narrative seemed to me to stress their exclusion even when trying to be inclusive.

And at Weston Park Museum in Sheffield, I was really hacked off by the dumbing down-ness of this display for kids:

‘Polar bear fur’ in the arctic exhibition at Weston Park

I mean, if you don’t want to splash out on a real polar bear skin for your public to touch, or have some point about ethics, leave out the display or be upfront about faking it. Don’t be misleading, and don’t think you can get away with it just because you’re addressing youngsters. They deserve your best.

By contrast, Museum of Copenhagen allowed visitors of all ages, who visited the open excavations at a construction site for the new metro lines, to don surgical gloves and touch some of the finds. This felt like a privilege, and was enlightening not only on the subject of Copenhagen history but also on the process of musealisation. 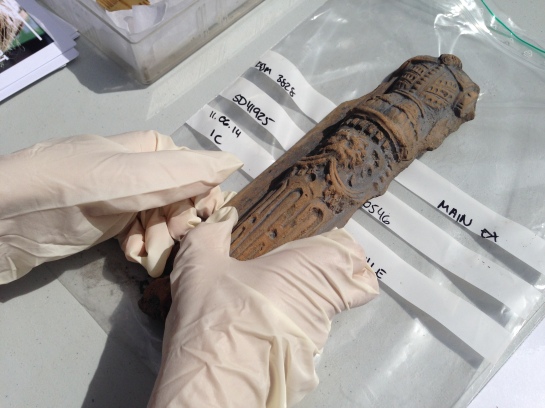 Finally, at KEA, Copenhagen School of Design and Technology, they have a material library with thousands of samples (and a database) covering a great variety of materials.

Not entirely sure if it’s open to the public or is only for the students, but it reminded me of a user informant in my first workshop, who expressed a need for exactly this kind of touchable collection. Many museums, Designmuseum Danmark included, hold library collections as well as collections of art or artefacts, why not extend it with material samples? Handling a textile, a metal, a polymer will give you far more information than reading about the same material, and could thus help you comprehend the museum objects in a different way.

But then again, looking closely also has its merits. And this guy, who I spotted on the street the other day, reminded me how photo sharing on social media may actually inspire os to look closer and engage with our surroundings in our hunt for new images worth a share (of course, this particular guy may have been a media phobic photography enthusiast, he still illustrates a trend). That cool kids give landmark sculptures or similar the time of day, I believe is a result of the social media revolution. Then again, a cynic could infer that we are merely looking for self adornment, not really caring about the origins or significance of the imagery that decorates our digital teenage rooms. Still, he looked, we look, we explore.

Snapshot of a photographer

Back in December, I visited the ABBA museum in Stockholm as part of the Nodem conference. I like ABBA, as someone of my generation does, and I have to say that the museum’s vision of having people ‘walk in and dance out’ worked. There were loads of interactives – quizzes, karaoke, digital dress up games. It was good fun. 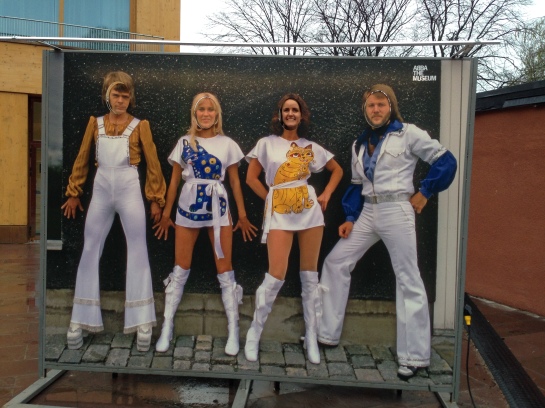 Got to be Anni Frid, at last!

But it also felt more like visiting a venue tailor made for hen parties than visiting a museum. Somehow, I it sits with me as a slightly gaudy experience.

By contrast, I was surprisingly touched by my visit to Graceland Randers, which I expected to be pure kitsch (I also like Elvis, so I’m equally biased when it comes to both). Whereas the Swedish experience was very ‘ABBA Inc.’; making full use of the commercial potential of the super group’s popularity and using the latest technological gizmos to amp up the experience, the fandom inspiring the Elvis museum was still very palpable. In fact, the museum’s founder, Henrik Knudsen, who built the Graceland replica to have a place to exhibit his huge private collection of Elvis memorabilia, was there to give guided tours of the collection. And even though it was a bit disappointing that the, well, ‘particular’ decor of the original Graceland had been replaced by a diner, a record shop and the exhibition gallery, the place actually felt quite museum like and not so tacky after all.

Not sure what my point is here. Maybe something about soul and lack thereof. Anyway, enough.