This term’s teaching is giving me a real buzz. It’s so great to have been able to offer a museology course, and get a bunch of dedicated students involved in tackling museum questions and making up their own minds about what museums are and could be. Reading through their blogposts and following their thought processes is so interesting, and I’m actually really proud of the response I’ve been getting so far (and also note that I must become a little more structured and lecturer-like, as I do have a tendency to get over-enthusiastic and ramble a bit). Even though it is only a short course, I’ve prioritised museum visits and talks with external researchers and practitioners, and although both I and the students are a little frustrated that we have too little time to engage in discussions and dive deep into the literature, it’s been a real treat to hear and experience all these practice perspectives.

A couple of weeks ago we visited The Exhibition Lab at Designmuseum Danmark, and had an enlightening presentation about the exhibition principles and research results from PhD researcher and curator Laura Liv Weikop. The exhibition was set up as an experiment, displaying the same selection of everyday design objects according to three different exhibitionary principles, i.e. offering an aesthetic, didactic or affective experience of the objects, and then measuring the audience’s response and preferences. It was a great little exhibition, and a perfect case for this course.

The Exhibition Lab – Affective display ‘You are what you own’

Laura’s preliminary results pointed to a preference for the affective and the didactic displays – a lot of visitors wished for a combination of the two – whereas interestingly, if not really surprisingly, the traditional glass case display was perceived by many – but not all! – as stale and old fashioned. As the cases are design classics in their own right in this case, purpose built by the Danish master Kaare Klint, they are hardly on their way out. Still, it will be really interesting to read Laura’s dissertation in time, and not least to see how the Designmuseum will follow up on these insights.

Following on from this, we visited yet another meta-exhibition; Heim Steinbach’s The Window at Statens Museum for Kunst. The display – Steinbach’s chosen term – comprising artworks from the collection, new works by the artist-curator and everyday objects collected amongst the museum staff, and playing with exhibitionary conventions like white cube aestetics, was an interesting hybrid of artwork and exhibition. Furthermore, the accompanying folder gave a thorough introduction to the principles and elements of the display, and thus provided not only a fine guide for understanding and discussing the exhibition, but also served as an great example of the role of museum communication for the experience and discourse of the exhibition (cf. Gade 2006, Ferguson 1995, as per curriculum).

And last week, one of the students, who also works as a wildlife conservator, had arranged an absolutely wonderful visit to the Zoological Museum. First up, Birgitte Rubæk, as member of the Museum Minds innovation group, gave us an introduction to the process, plans and visions for the new Natural History Museum. If everything goes right (read: if all funding is found, so that budgetary restraints and other practicalities will not completely hollow out the original ideas), it’s going to be a truly spectacular place. And not only because of the remarkable architecture, but because of the strong curatorial ideas guiding the development of exhibitions. The group has devised a set of dogmas (in Denmark we’re rather fond of the dogma idea following the success of the film indstry in the 90’s) which center around the unique experiences of authentic artefacts that museums can offer.

Building bridges between natural science and humanities, and insisting on establishing an experience that also appeals to ‘unaccompanied majors’, and not only to families and children, the museum is not afraid to go against the current in it’s vision of what makes a great museum. A notable example is the rule stating that ‘if other media can do it better than us, we won’t do it’, which is in stark contrast to for instance branding consultant Damien Whitmore’s assertion that “In 20 years, the V&A will have more TV producers than curators.” (in Sten 2010). Rubæk’s easy going presentation thus served up a lot of food for thought, and it was hard to break off the conversation.

However, we were also privileged to a peak view of the collections, so had to move on for this fascinating experience. Five storeys worth of mammal hides and bones, stuffed birds and pickled snakes, toads and lizards; including a full blue whale skeleton, and no less than 600 polar bear craniums. 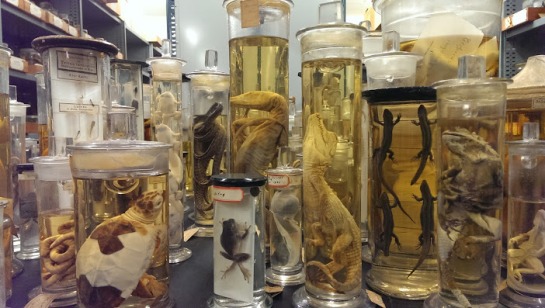 From the collection at Zoologisk Museum. Photo by Niels Toft Larsen.

The latter really brought home the point about museums, in this case a university museum but also generally, as a hub for research. And Mogens Andersen, our guide and collection keeper was an amazing presenter, both knowledgable and infectiously passionate about his work. As such, he also illustrated the amazing qualities of museum guides, which may well be supplemented but cannot be replaced by any other medium.

Finally, we found time for a tour of the current and temporary exhibitions, where I learned that the dioramas are indeed going to go. As mentioned in an earlier post, I have a bit of a nostalgic soft spot for dioramas, and the marsh biotope in Zoologisk Museum in particular, so it was kind of sad news. But then again, I had to admit that the 40-ish year old exhibit was so tired by now that it’s representational value was stronger as an artefact of museum history than as an illustration of wetland wildlife. And interestingly, the much more recent dioramas depicting urban fauna seemed the most outmoded. I still believe that dioramas could be in vogue again some day, and I would argue for the preservation of at least some of the displays, if only as examplars of yesterday’s exhibition technology and ideals. But until such a time, I guess their outdatedness risks getting in the way of their communicative power, and not least the power of the museum to project a strong vision for the future.