Finally got round to actually working with the empirical material from my two workshops at Designmuseum Danmark. What’s more, I think I’ve found my handle on it too, after battling through uncertainties about how, and not least why I should do it.

There’s a back story to that uncertainty. Initially, I set out to explore how mobile museum experiences would tie in with more general pursuits of cultural/fashion interest via mobile and social media; a media ecology kind of thinking. But as I was also very keen on carrying on the design research approach I had developed in my master thesis, I came to realise that there was a mismatch between the questions I wanted to ask and what my methodology would let me answer. Methodology won out, sending me on a route that is more museology and less media oriented, i.e. asking about the implications of mobile museum experiences for the museum. And yet I felt that I still had to do some kind of empirical study, that I had to produce some data I could analyse and learn from and base my assertions on. Being an academic rookie, I lacked the confidence to stick to humanistic analysis with a design twist, thinking that it would not count as real science. So now I’m trying to make it count.

The concept of coding still feels a bit alien, like there’s some part of it I’m not getting because I never trained in social science. I’m a humanist, studied literature before moving on to design and digital culture studies. I have only a vague notion of grounded theory; ‘coding’ is not really my lingo. But it’s an aspect of analysis, right, it’s marking up your data (data is another word that feels wrong, cold somehow) to work out what’s in there, what the themes and discourses are, exposing contradictions and finding patterns, deciding what issues to pursue and how they relate to the material overall. At least that’s how I understand the process I’m going through.

After giving some consideration to coding software for qualitative data, reading about and checking out demo videos for Atlas.ti and Nvivo, I decided that a) spending time learning how to use the software would be a detour, given that my material is not that extensive, and b) the digital format somehow distanced me from the content, whereas an analogue approach gave me a better sense of what was there and what I wanted to do with it, as an iterative process rather than working to a preset design. Fairly grounded theory-esque, I guess. Keeping it handheld was also more consistent with my process so far – designing my probes and the design game for the workshops had been a very touchy-feely affair, and being able to paste the whole thing on my wall gives me a better sense of overview, something I’ve used in various stages of the project. 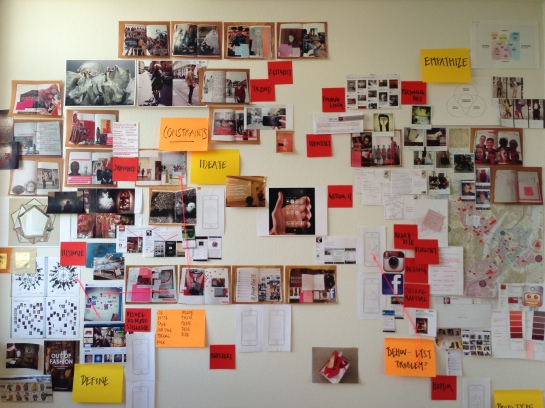 So through painstakingly adding hundreds of multi-coloured post-its (annotating and marking different strands and marvelling at how pretty it is) I have uncovered some interesting themes that I can unfold in my continued analysis and discuss in relation to other sources and observations and to theoretical positions in museology. These themes include commercial constraints and considerations (and how much the participating curators take these into account in their work); the importance of brand and branding; notions of institutional authority and curatorial ambitions; museological positions and practices; professional positionings; audience/user perspectives including UCG; pros, cons and contradictions re. cross-media communication; fashion as field and fashion as perspective; and more. Despite my recurring uncertainties about what this empirical study was really for, given that it is so limited that I cannot make many claims on this basis alone, it has actually served the purpose of illuminating some of the possibilities and conflicts in my field of study, as per my research design:

So it’s coming together. But will I also be able to make sense of it, as in valid scientific sense? Still grabbling with (and increasingly fascinated by) what science is, what makes it scientific, especially when pushing the traditional boundaries of science. I expect some would argue that what I do isn’t real science, and I know that making a solid argument for the validity of design research in general and of my study specifically will be one of the prime tasks in my dissertation. Which is why I ramble about it here, even if it also makes me feel exposed, to try to come to grips with what I’ve done and why. Thinking out loud, in print (and keeping my supervisors updated too). In this way, these slap-dash pontifications on the blog serve as rough sketches for the arguments I wish to make in my thesis, or sometimes just to off-load all the preamble, so that in my thesis, I can cut to the chase.

Martin Ludvigsen, in chapter seven: ‘Reflections on Interaction Design Research’ of his 2006 PhD dissertation Designing for Social Interaction does an excellent job of explaining the groundings of interaction design research in HCI and makes a strong argument for its scientific validity, which I will surely build on in my own thesis. (Actually, it’s the kind of writing that I wish I could do.) Conceding that ‘[f]undamentally it is difficult to accept design thinking as valid because of the intrinsic lack of logics and, when we delve deeper into it, the lack of scientific rigor with regards to reproducibility, falsification, objectivity etc.’ (2006:93) he moves on to expound the virtues of aesthetic reasoning as an alternative to logic. Rather than narrowly focusing on functionality and measurable results, ‘thinking aesthetically about an interactive artifact is to be conscious about its entire composition over time and the effect it has on the context and users’ (ibid.), Ludvigsen argues. Building on the German philosopher Baumgarten, as explicated by Kjørup (1999), he thus establishes aesthetics as an analytical discipline, and alternative route to enlightenment, as ‘conceptual discovery or epistemological evolution is a continual shedding light on new concepts’ (Ludvigsen 2006:94). Using our cognitive capacity for creative thinking and innovation as a way to understand ‘wicked problems’ (Buchanan 1995, in Ludvigsen 2006:90, 92), i.e. problems that can only be described in full through attempted solutions, and for aesthetic judgement as conducive for hollistic understandings of problems in context and for (un)covering conceptual grounds, should therefore be regarded as an invaluable supplement to logics-led scientific experimentation. As argued by Ludvigsen ‘The aestetic ‘track’ in the human mind is active. This should be read as a proposal for a foundation to talk about design thinking as equal – not subordinate to – logic and traditional scientific thinking’ (2006:97).

He then goes on to cite Latour’s normative definitions of science, which break with the traditional paradigm of Popperian falsification to build instead on the principles proposed by the Belgian philosophers Stenger and Despret. Without selling short the importance of rigor, the emphasis here is on scientific relevance, suggesting that sticking to tried and tested scientific activities does not in itself secure that a study is scientific, as, according to Stenger and Despret, scientific means interesting and risky (Ludvigsen 2006:100) – breaking new ground and making yourself vulnerable to seeing your hypothesis crumble. The aim of science then, rather than making absolute statements, is  ‘rendering talkative what was until then mute‘ (ibid.:101); to articulate propositions about the world, thus adding to what Latour calls the multiverse. This, obviously, ties in neatly with what I touched upon in my paper for the Nordes doctoral consortium, also with reference to Latour, about the ability of design to articulate (museological) matters of concern, thus posing a constructive critique which allows for discussion of the current state and possible futures of the museum.

This sort of stuff is right up my alley. I’m really not much of an empiricist, finding theory and creative explorations much more inspiring and hence more productive for my cognitive process. My home brewed, half baked heuristic is that just like learning theory talks about different learning styles, different kinds of science speaks to different kinds of minds. So even though I can appreciate the significance of, say, quantitative data on patterns of mobile use in museums, it doesn’t necessarily push my buttons or satiate my curiosity about why these use patterns are as they are, why people were in the museums in the first place, the existential and social role of museums in society, what it all means and if it could be otherwise? So it’s truly great that other scientist will do the crucial studies that I don’t have the knack for, and that I instead get the chance to apply different methodologies to different types of questions (i.e. watered down versions of the questions above). Which I hold are worth pursuing, and which might speak to others with an interest similar to mine.