This post was actually writen back in March, but never finished as I got caught up in a flurry of PhD-courses. Since then, it has sort of been blocking the blogging, and I therefore resolve to publish it in this unfinished form, to at least keep some of the references and thoughts that inspired it originally, but which are not at the forefront of my mind now. Hopefully, this way, I will make space for some of the stuff that is.

Once a month, I receive a report from Museum Analytics on the most engaging content from museums on Facebook and Twitter, as measured by the number of likes and retweets. The numbers aren’t that interesting in themselves, really – world famous, English speaking institutions like MOMA or the Met will always have a greater number of followers and can therefore generate more likes or RTs than, say , a local Danish Museum – still, it’s interesting to see what type of updates gets the best response. 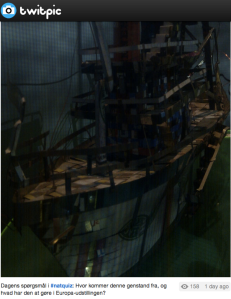 My personal favourites when it comes to museum updates, are not necessarily the ones that score the highest numbers, however, but the ones that generate interesting response from users related to the institution’s subject matter. The Danish National Museum, for instance, use both Facebook and Twitter well to engage people with archives and collections, as in the weekly #natquiz; where people are asked to guess the objects pictured, right:

Another fine example is The Metropolitan Museums recent postings on Facebook, inviting the audience to imagine and share how they would wear one of the exquisite pieces from their couture collections, and getting some playful comments in return, below: 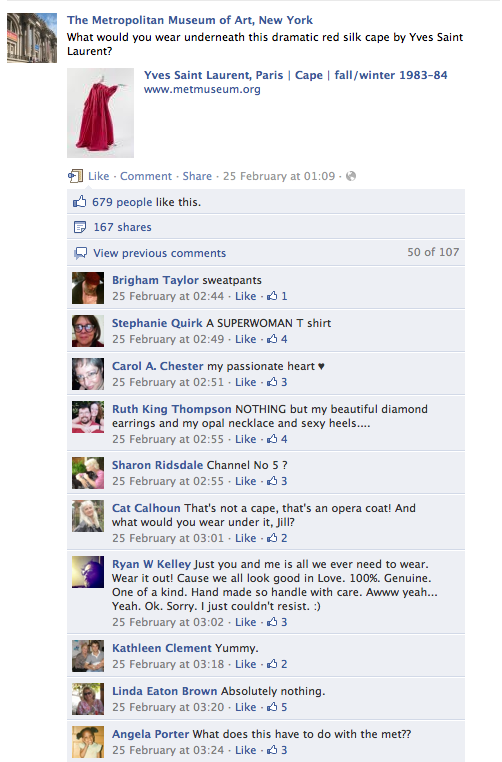 More elaborate is V&A’s recent Street Style Fashion Competition, an open call to upload a photo of your favourite look to celebrate London Fashion Week, which again generated some great shots and lots of user comments: 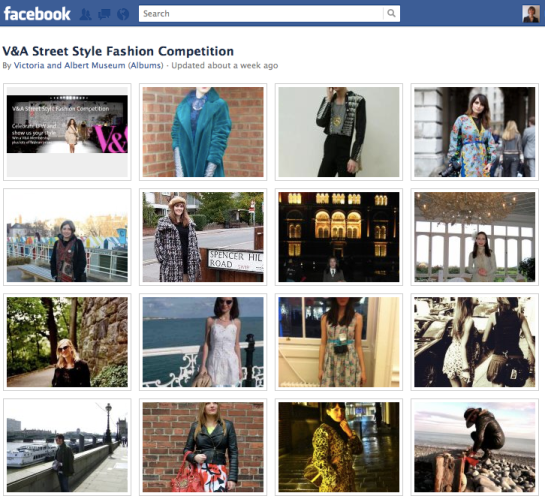 Admittedly, the prizes were neat. But judging from the comments from the winner, the best part was getting recognigtion on her style from the curators of one of her favourite museums. (For what it’s worth, here’s a thumbs up from me too: You look gorgeous, darling!)